This week I’m talking at the RCEM conference in Leeds. It’s the CPD conference and so has a slightly different format to most ED conferences as there is a single track that runs for 3 days. The emphasis is on giving the delegates updates and information that’s transferrable back into UK clinical practice.

You can download the full program here: RCEM CPD conference 2016

My original brief was to ask the delegates to think about how we practise EM, to think about how we practise and to consider how we can deliver great care under difficult circumstances. The overarching theme is how we can be as good as we can be, and how that relates to having a satisfied and positive experience at work. The poignancy of delivering this on a day when we are also supporting our juniors in their industrial action regarding the imposition of their contract is not lost on any of us.

However, there are ways that we can think about what we do that might help us have better and more fulfilling careers, and that’s the theme of this blog post and also one of the themes for the talk.

You might recognise the term self actualisation from a teaching course you may have completed. It’s certainly described in one of the earliest educational theories I came across on the Advanced Life Support Groups generic instructor course. I’m sure you remember Maslow and the hierarchy of learning needs.

Self-actualisation is a term that denotes a desire for self-fulfilment. It is therefore a state where the learner is motivated to improve and reach their peak as opposed to being motivated simply by the need to mitigate deficiencies. Maslow’s approach is to promote what can go right, not just what can go wrong with people. I think this is a really positive way to look at the world and clearly something that educators should promote. Self-actualisation for each of us will be different and it’s not something that we have all of the time. The key point is that self-actualisation comes from a desire to achieve, not to mitigate, deficiency.

The original version of Maslow’s hierarchy looks like this. 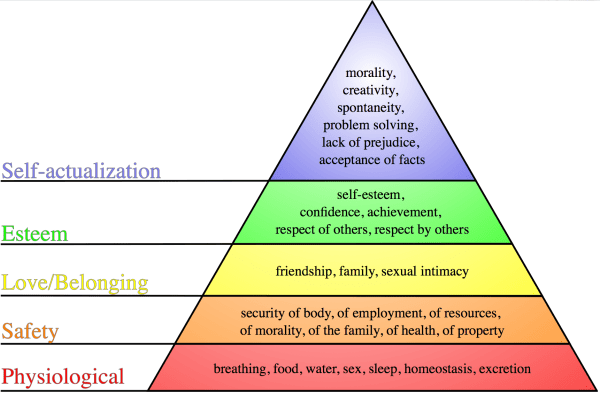 Although often described as a hierarchy, Maslow’s system suggests that in order to realise personal potential, self-fulfilment, seeking personal growth and peak experiences, we need to have these lower levels in place if we are to successfully reach the top. The goal (if you want to think of it as a goal) is that self-actualised people are achieving a state where they are as good as they can be.

Self-actualisation matters because if we are fulfilled in our lives and work then we can be good, motivated and happy; whilst we recognize that we will be spending a LOT of time at work that surely has to be incredibly important. Happiness is more than just an emotion, it’s a sign of success and thus being a better clinician for ourselves and our patients. We also want to keep learning and maintain our motivation to develop excellence and mastery in what we do. We are most likely to put the effort into our development if we are happy and self-actualised.

As emergency physicians happiness and success matter. I was somewhat alarmed to see these interesting statistics from the British Journal of Cardiology in the period 1997-2004. That’s a rather frightening statistic there in the middle. The average age of death for emergency physicians is 57.5! Now, before everyone panics there are some significant caveats here. This was an obituary study, they only looked at people who have already died, and not those who are still alive. EM is only 49 years old and therefore there are very few elderly emergency physicians who have the opportunity to die at a ripe old age. Basically, until everyone has had the opportunity to die we won’t see a true average (I hope). They also noted the increase in suicide and accidental death as compared to other specialities, and several of my colleagues have died in these ways, but again that may be a feature of the research design. Should we be worried? Maybe, but I’m not sure as yet.

We can also look at burnout scores for emergency physicians and there is increasingly evidence from around the world about where we fit in the burnout stakes. The following data is from JAMA looking at US physicians in 2012. Normally it’s great to win the most points, but clearly not in this particular race. We can also look at the overall influence of happiness against mortality. The association between unhappiness and increased mortality is well described but the question of whether unhappiness per se increases mortality is trickier. Unhappiness is associated with many other factors that are known to increase mortality, such as ill health and chronic disease so an association is perhaps not surprising. Despite a long standing belief that happiness leads to early death, recent studies have challenged any belief in causation. A large study in the Lancet adjusting for other factors published in 2015 addressed precisely this issue. Happiness per se does not allow you to live longer, but let’s face it we don’t want to spend our days being miserable.

These data, limited though they are, do suggest that we have challenges as EPs to deliver great care without damaging ourselves and those around us. I get that, and I also realise that the environments that we are working in at the moment are barriers to some of the elements within Maslow’s hierarchy. Current concerns about job security, recognition, workload and fears about the future will no doubt affect anyone’s ability to self-actualise. Indeed, Maslow himself suggested that very few people achieve the highest levels because the barriers here in the lower levels are often deficient, and I can see how we might see how that might be an issue for us now. If you’re interested you can take an online test to determine your own level of SA. Here’s the link if you are interested http://similarminds.com/maslow.html. (CAVEAT – I have no idea whether it’s a valid tool but it seems fun.)

I can see how we might translate some of these needs for ourselves and look to develop them in our departments. The bottom line here is that in order to feel that we are doing a good job we need these elements to be satisfied and I can admit that there have been times when elements here: job security, external inspections, the CQC, new management, can threaten and disrupt the bedrock of my image and self worth. It can lead to bad behaviour and a loss of esteem and thus potential.

The 5 element version is by far the best known version of Maslow’s hierarchy but it was not his final word on the subject. Towards the end of his life Maslow argued that the hierarchy needed an expansion. He recognized that we, and I think particularly in jobs such as medicine, are motivated by additional elements. The levels now include cognitive and aesthetic needs, recognizing that a desire for knowledge and beauty are important to us. Understanding and doing something well, in a way that becomes appreciated by others motivates and drives us to know more and to develop on a road to self-actualisation. Cognitive needs – a need to understand and be able to explain are drivers for all of us. Doctors don’t want to just do things, they want to know why and how. Similarly aesthetic needs, the need to do things in an elegant and beautiful way . In essence we appreciate meaning and beauty in fulfilling our potential.

Transcendence is different and lies at the top of the new pyramid of needs. For me it’s the most interesting and aspirational part of the hierarchy as I think it reflects a motivator for many emergency physicians and other colleagues in the medical education and #FOAMed world.

The stage beyond self-actualisation he called transcendence. It all sounds a bit Eastern Mysticism at this point, but don’t get put off  by the terminology. Transcendence can be summarised as giving it back, of helping others on their journey through their learning and development, in helping others in reaching their goals.

Within that framework is the realisation that to do so takes work, sacrificing a degree of altruism, and that tasks which take effort, notably when involving a personal sacrifice, are more rewarding.

I can summarise this as – give it back and you will receive. It’s not just good for the people around you, it’s good for you too.

If you want to know more then there is plenty of information on the internet. I particularly like this from Corinna Rachel. She clearly links the higher hierarchy of needs to happiness. For example, just think about the buzz you get from teaching and coaching others, from seeing them develop and to take on the skills and knowledge you have. It’s a win-win motivator.

In summary, it’s fair to say that times are tough in UK emergency medicine and many external factors impact on our happiness and ability to fulfil our potential. This is true for many people and professions. This does not mean that we cannot aspire to the ideas of self-actualisation and transcendence. If we do there is every chance that we can create a better and happier world for ourselves and those around us.

12 thoughts on “Self-Actualisation and Transcendence in Emergency Medicine. St.Emlyn’s. #RCEMCPD16”