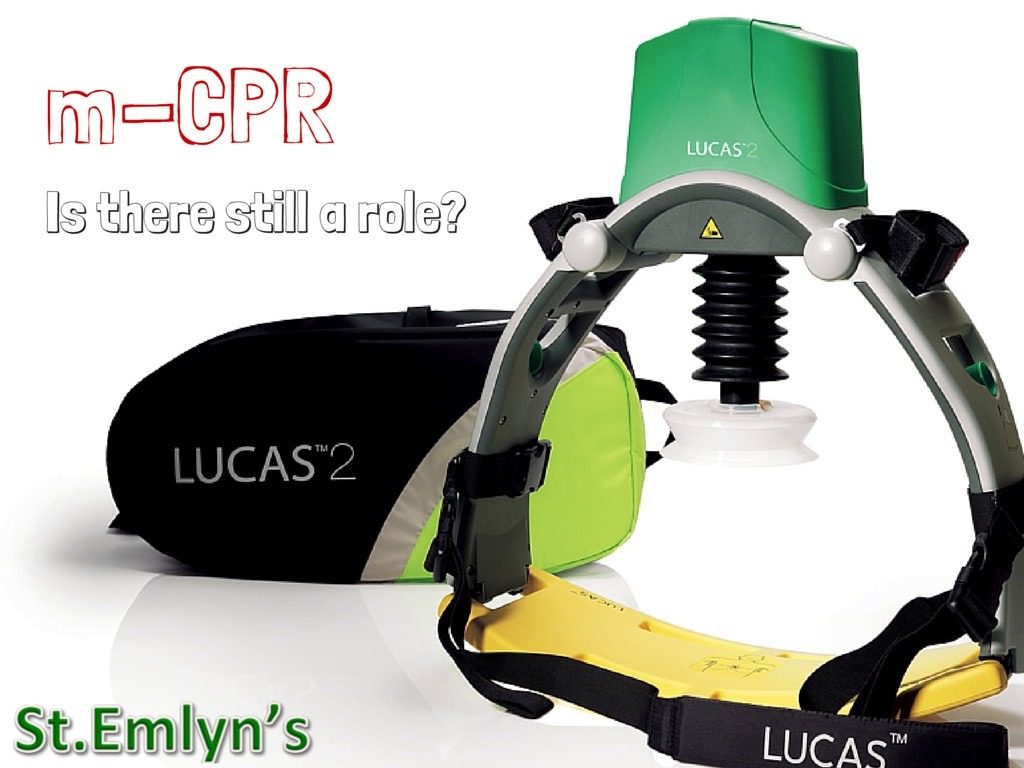 In some ways you might be forgiven for thinking that 2014 was a bit disappointing in terms of EBM. A number of clinical trials that I’ve been looking forward to for some time have in effect produced negative results. Early goal directed therapy, target blood pressures for sepsis, hypothermia for post cardiac arrest patients and the failure to find a mortality benefit for mechanical CPR in cardiac arrest patients.

Many of these trials share common themes in that they challenge current practice, established belief and in some cases strength of belief that borders on dogma.

This week we see the PARAMEDIC trial published in the Lancet. This is yet another trial that has produced a negative result and I urge you to read the paper, read this review, but also make sure that you get to the end as all is not what it may seem.

Mechanical CPR has been around for a very long time. Back when I was an SHO we briefly had experience with the ‘Thumper’ and a number of other mechanical devices designed to reduce the effort of CPR and to improve the quality of CPR. There is ample data that considerable effort is required to deliver effective CPR and that rescuers cannot maintain it for much more than a few minutes. There is therefore a great deal of face validity in transferring the effort of CPR over to a mechanical device.

Earlier this year the LINC trial was published which examined the use of the LUCAS-2 device. It found no benefit to mechanical CPR, Cliff Reid has a good blog post on the trial and some interesting comments on the statistics which are really worth reading after you’ve got your head around the PARAMEDIC trial.

The abstract of the paper is shown below and as always you really should read the paper yourself and in full if you have time. It is currently open access so there really is no excuse. 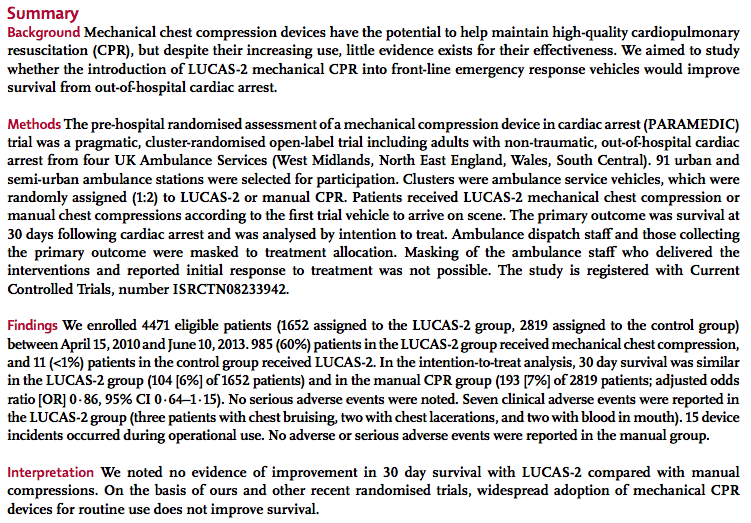 In overview then, this is a cluster-randomized trial of mechanical CPR vs. routine CPR for prehospital cardiac arrest patients in the UK. The authors have found that mechanical CPR demonstrates no benefit over routine care. Let’s explore this paper further.

4471 patients were recruited in a 2:1 ratio (mechanical: normal CPR) over a 3-year period. Pregnant patients, traumatic cardiac arrest patients and patients who appeared to be under the age of 18 were excluded. Beyond that the criteria for entry into the trial were broad, appropriate and reflective of real clinical practice.

Is the design appropriate?

The design is interesting I that the unit of randomization was the ambulance rather than the individual patients. In essence the research team randomized vehicles to either have mechanical CPR or not. Vehicles were dispatched to cardiac arrests as per normal protocol with the decision as to whether the patient received m-CPR being based on what the first ambulance that arrived was equipped with.

Whilst this is a different form of randomization to that which we have seen in many other therapeutic trials it is a design that I increasingly see in prehospital care trials (a similar trial in Australia randomized paramedics rather than patients or vehicles).

Clearly in a trial of this nature there is no possibility of blinding (masking) so it was conducted in an open label fashion (as everyone would know which arm of the trial the patient was in).

Whilst an alternative design could have randomized individual patients, perhaps even stratified for initial rhythm, age, sex etc. the practicalities of trying to achieve that in the time critical challenges of a cardiac arrest mean that this is a reasonable and appropriate design that can still answer the clinical question.

Consent from the patient in cardiac arrest is clearly impossible to obtain and so patients were enrolled under a waiver of consent. Survivors were then consented post discharge to obtain 3 month and 12 month follow up data. The opportunity to recruit under a waiver of consent is clearly essential for trials in emergency medicine and is now being used in a number of other trials, which may benefit thousands of future patients.

So let’s abandon m-CPR then?

The results are disappointing for those of us who thought that m-CPR might be a novel and useful addition to the armamentarium of the resuscitationist. This study and the LINC trial could be considered to be the death knell of m-CPR and in a rather simplistic way then yes it should be, but I think we need to stop and pause at this point and think a little deeper.

Everything from this point onwards stems from a conversation I had with Cliff Reid earlier this year, a conversation that has changed my practice in the management of cardiac arrest. I would also ask you to listen to Scott Weingart’s talk on cardiac arrest from SMACC. Whilst you may not agree with everything they say (and that’s fine) I urge you to seek a deeper message from both.

If I had to pick a theme that encompasses what I learned from Scott and Cliff, and one which has changed my view of cardiac arrest management it is that in many cases ALS is life support.

Let’s explore that in more detail. ALS is life support. What is this aim of life support? Well in some cases we may think that it is to definitively treat the cause of cardiac arrest, notably VF/VT, but is it really? If we stop and think then it is obvious that VF/VT do not occur without reason, and all causes of cardiac arrest have a precipitating cause. So perhaps we should think and teach ALS as follows.

ALS is simply a holding mechanism to keep our

patient alive for long enough to find out

what the cause is and to treat it.

This epiphany for me has been far too late in life and I was worried that perhaps I had missed this incredibly obvious fact, but having spoken to many colleagues I don’t think I have. Conversations with colleagues result in a similar change in viewpoint and observationally we see a behaviours in the resus room that appear to show ALS as an end point rather than as a waypoint. Think back to the last time you saw a good ROSC in a resuscitation. Did the team stop, pause, give the impression that the job was done? Or did they treat ROSC as a waypoint to definitive management. Hopefully it is the latter, but on occasion I see the former.

As resuscitationists we must embrace this concept of ALS/ROSC as a waypoint and understand that our role is to manage the cardiac arrest whilst seeking the definitive management of the cause of our patient’s arrest. This viewpoint emphasizes the importance of the 4H’s and 4T’s and should encourage us to do this as soon as effective life support has been established.

In practical terms what does this mean for me and my resus team? Let me suggest the following that I believe maintain the importance of ALS whilst ensuring that we treat cause and not just the cardiac arrest (which is the symptom). These are marginal gains in process and behaviour, but although marginal they might just make a difference.

And what of m-CPR? Should we abandon it or should we not really be that surprised that a tool designed to maintain a  holding pattern makes little difference to outcome? Perhaps the real question is whether we need a more proactive approach to arrest management, one that allows us time to think about what the cause is. Perhaps m-CPR has a role in allowing us some time for thought, some time to consider what is important. Not the persistence of a holding pattern, but the time and staff to think and progress with treatable causes.

This paper tells me that m-CPR is no worse than normal CPR so given the option and the funds I’ll have the LUCAS-2 so that I may use the released brainpower and staff to focus on what might just save my patient’s life.

I am frequently skeptical about airline analogies with healthcare, but there are exceptions. I was recently talking with a friend who is a training captain for a major airline and he was explaining to me that during a major emergency one pilot may be solely tasked to keep the plane in the air, whilst the other one figures out how to resolve the cause. Increasingly my view of cardiac arrest management, and in other time critical conditions, is that  we can adopt a similar approach in the resus room.

If you’re in my resus room you might just hear me say.

‘Fly this patient for me, I’m going to work out what’s going wrong……’