In Virchester, it’s not uncommon for our Friday and Saturday night punters to arrive worse the wear for drink and/or drugs. Most EPs of any experience will be able to tell you stories of the opiate misuser who’s hit we have “effin’ ruined” in the course of saving their effin’ life or of Smurfs who have drunk amyl nitrate and have the rather worrying looking methylene blue administered to them, usually to great effect.

Lately though, the profile of drug use has been changing. A few years ago mephedrone/methylcathionine/meow-meow was a big thing and caused a spate of poisonings across the UK. The impression I got, after asking punters why they had taken it, was that it was novel and not illegal. The wisdom of putting something that is marketed as plant fertiliser into your body, especially when marked not for human consumption, is beyond me and thankfully, the usage seems to have peaked. That the UK authorities will claim that this is due to their prohibition of it is neither here nor there in my opinion; I just suspect that things have moved on.

As a result of my recent post about Glastonbury, a former electronic music event organiser and now medical student got in touch to tell me about the rise of PMA (paramethoxyamphetamine). This is now being incorporated into “Ecstasy” tablets sold in the UK. Whilst we saw none of it down in the south-west, upon returning to my day job at Virchester, I was informed by a reliable correspondent working in an ED a few miles away from StE’s that green pills suspected to contain PMA had arrived in Greater Virchester. Over one weekend, 5 patients had presented to the one ED and one had required dantrolene for presumed malignant hyperpyrexia. A local newspaper, if I had bothered to read it, would have told me the same thing months ago.

Green buddhas or rolexes (due to the crown that’s embossed on the tablet) have now been reported by the BBC several times over the last few days and linked to the deaths of several teenagers in western Scotland. Police have warned that there may be trouble at the “T in the Park” festival this weekend and have advised caution. 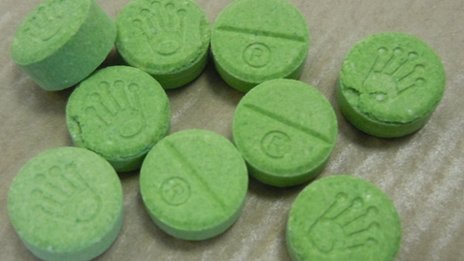 The National Poisons Information Service database in  the UK, toxbase, has, behind a login (sorry lay people, but you shouldn’t be reading this anyway! – Ed) a wealth of useful information. It suggests that the symptoms of mild intoxication are the same as most other amphetamines with increased heart rate, blood pressure, temperature and pupil size. Empathy is increased and it possibly makes bad dance music listenable (that’s my interpretation of it anyway, but still not an excuse for drug misuse, or bad dance music!). At higher doses problems become increasingly likely, and this may happen almost unconsciously as PMA takes longer to have an effect than MDMA and therefore users may take more, thinking they’ve got a dodgy or weak batch. There’s only a thin margin for error before the rather worrying (and potentially fatal) severe effects such as cardiac arrhythmias, convulsions, delirium, coma, hypertension, severe hypoglycaemia, hyperkalaemia and severe hyperthermia kick in.  [So I guess there’s a reason why they call this drug ‘Dr. Death’ – Ed]

Toxbase recommends glucose for hypoglycaemia; other sources suggest that this may be hard to effectively treat and require a LOT of glucose. I presume that this is due to the neuromuscular effects of PMA, which is also responsible for the hyperpyrexia, one of the biggest dangers with PMA overdose and the serotonin syndrome. Aggressive cooling is needed for a temperature greater than 39 degrees Celsius including ice baths and dantrolene. Part of me wonders whether the kit that we’ve got for therapeutic hypothermia could be press-ganged into service for cooling down hot clubbers.

Aside from this, there’s little else to offer. In previous cases I have seen, the kitchen sink was thrown at the hyperpyrexial patient – intubation & ventilation (I’d probably use  thio/ket and rocuronium as induction), benzodiazepines, fluids and appropriate antiarrhythmics. We’re into the realms of uncharted physiology here so there isn’t really a good RCT (thankfully!) to go on. Also thankfully, these horrible effects are rare, so we don’t have much in the way of even case reports to go on.

Anyway, if you’ll excuse me, I’m off to put the Hartmann’s in the fridge and check we’ve got some dantrolene. We should advise people that if they’re off out this weekend, they should not take drugs.  If they insist on ignoring that (which StE’s does not condone) they should at least not hammer the green pills, go slow and look out for their mates. NHS EDs are always there and we’d much rather get to people while we’ve still got a chance of saving their lives (i.e. before the temperature of 40 has fried their brain and kidneys!).

Cite this article as: Alan Grayson, "Something for the weekend, Sir?," in St.Emlyn's, July 26, 2013, https://www.stemlynsblog.org/something-for-the-weekend-sir/.

5 thoughts on “Something for the weekend, Sir?”