It’s a bit of a standing joke here at St Emlyn’s that I resolutely live in the Yorkshire countryside, aiming for a self-sufficient existence, yet practice what is very much urban EM. As it is now autumn, the season of mists and mellow fruitfulness, my thoughts turn to the foraging of that most mysterious of beasts, edible fungi, like the beautiful boletus edulis above. This post has been brought about by a couple of recent triggers. Firstly, the tale of Nicholas Evans, the author of the Horse Whisperer, in a recent BMJ, where he detailed his patient journey through renal failure to eventual transplant from his daughter as a result of poisoning from what he thought were ceps, but turned out to be cortinarius speciossissimus, the deadly webcap; this infrequent series is always a highlight of the BMJ, and this one particularly well written as you would expect from a man who is a NY Times best-selling author. Secondly, a recent case for discussion with the NW EM Registrars, where only 1 of a group of 15 could identify magic mushrooms. Thirdly, Simon’s disgusting picture of a wild growing morel – that’s quite frankly the sort of picture that should trouble the web’s adult filters!

The pursuit of fungi is not without peril. It may be a symptom of the UK’s dissociation with the countryside that we have little in the way of mushroom poisoning, or it may be that people such as Richard Mabey, Michael Kuo and Hugh Fearnley-Whittingstall have educated people sufficiently that they don’t pick the wrong ones! However, at about this time last year, the Daily Torygraph reported that there had been 130 poisonings in the UK, so it may be time to raise the awareness of this potentially fatal ED presentation. For our more international readers, it is certainly an issue as these articles from Jordan, China, the US and Switzerland would attest. 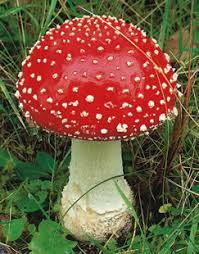 The usual scenario seems to be unsupervised children plucking and eating attractive looking mushrooms such as amanita muscaria, pictured above. This mushroom which is straight out of a Lewis Carroll book, couldn’t possibly be harmless, right? It certainly isn’t likely to be fatal, but can still make adults and children fairly poorly, in a psychological and gastrointestinal way. It get’s one skull and crossbones  (or equivalent, usually out of three) in my fungi foraging books. It’s possibly being used recreationally more frequently than it used to be, in the UK, due to the recent ban on the picking of psylocybin, or magic mushrooms. You’d need to consume a lot before you died and by that point, the world would be falling out of your bottom and you’d be on a higher plain talking to god anyway. The Lapps use it for the second purpose (they’ve got to do something to get through that interminable winter!) and it has been used as an entheogen since before Roman times.

Toxbase is unusually spartan on details of fly agaric poisoning. The treatment is mainly supportive and very infrequently intubation and ventilation is necessary to control seizures. Atropine is not recommended as it is thought to enhance the action of ibotenic acid, which along with muscimol (and to a much smaller extent muscarine, if you remember 1st MB physiology of acetylcholine receptors?!) is the major toxin of this ‘shroom. These act as agonists on glutamate and GABA A receptors respectively with ibotenic acid being a prodrug of muscimol. Deaths are rare and there shouldn’t be anything that we, in the developed world at least, shouldn’t be able to cope with.

This is amanita phalloides, more commonly known as the death cap. It is of the same family as the fly agaric above but gets three skull and crossbones in my mushy books. The common name is probably well deserved for two reasons: firstly, a single mushroom can kill and secondly, it’s responsible for 90% of deaths by fungus. The problem is a protein called amanitin, which exists in two forms alpha and beta. This, after a brief period of  latency, causes profound abdominal crisis, with pain, vomiting and diarrhoea, which may be so extensive as to cause shock. After 24 hours or so, this subsides and leads to a short period of recovery prior to fulminant hepatic failure.

Treatment is problematic. Toxbase has it’s usual spiel (convulsion, coma death – just for C/N Ranson!) that includes supportive therapy (fluids, correction of electrolytes) and, rightly or wrongly, sodium bicarbonate for metabolic acidosis. I am not a toxicologist, but I have never been convinced of the utility of bicarb in any acute situation – if anyone can provide any hard evidence of benefit in any clinical situation, I’m willing to listen and debate. They do recommend Penicillin G in massive doses as it “reduces the uptake of amatoxins into the liver in experimental models”. They suggest 0.5 MU/kg/day (or 300mg/kg/day for those of you who want boring SI units)  as a continuous infusion. Also charcoal is recommended in repeated doses for enterhepatic reclaimation of amatoxins (again with theoretical benefit but no hard evidence). They explicitly DON’T recommend

(a) constant duodenal aspiration to prevent enterohepatic circulation of amatoxins

But the reason why is not clear. I know that this may sound like I am overtly cynical about the service provided; I’m not – I’m genuinely grateful for the collected wisdom available and recognise it to be useful and done under difficult circumstances as most poisoning is rare, treatment is extrapolated from either experimental evidence or theoretically beneficial; certainly our gold standard of PDBRCT would be difficult and, I suspect, at times highly unethical.

My problem is that the evidence for their decisions is not cited on the site, which I find difficult to reconcile with the scientific method; it’s certainly contradictory to #FOAMed. A PubMed search reveals as it’s number one hit this article, which while stopping short of declaring itself a SR or MA (we like uber-quantitive stuff here at StE’s!) is a peer-reviewed article, with references! They do recommend milk thistle compounds and NAC as potentially therapeutic modalities, albeit with limited evidence. The biggest trial of NAC to date for non-paracetamol induced ALF showed it to have benefit in avoiding transplant and improving 1-year survival particularly in those with low encephalopathy scores. A review of silimarin (the active ingredient of milk thistle) is vaguely encouraging, but I cannot access it due to being in a complementary medicine journal. Grrr!

The most encouraging treatment, to prevent the likely death or need for liver transplant seems to be MARS. This is essentially CVVHDF with knobs on, using a protein rich dialysate to try and extract more of the hepatotoxic compounds. In small trials here and here, it has been shown to be of benefit, with the caveat that more research is needed before it can be recommended as standard therapy. Mind you, with the problems of organ donation in the UK and elsewhere, anything that can avoid a risky and rare procedure such as liver transplant is probably worth a try, especially if death is likely.

This ugly looking mushroom is cortinarius speciossimus, or deadly webcap, that caused the renal failure of Nicholas Evans as detailed above. Again it gets 3 skull and crossbones and is one of the most deadly fungi. A related mushroom, the fool’s webcap,  was responsible for a mass poisoning in Poland in the 1950s. Toxins, including orellanin, cause delayed onset renal failure, most likely leading to dialysis and renal transplantation.

To conclude, there is fun in fungi, the texture and flavour available from the wild larder being infinitely better than any supermarket and the satisfaction of cooking a meal with foraged items cannot be underestimated. There’s also money in it, as Miles Irving, who founded the company “Forager” would attest. However, if you go down to the woods today, be sure of what you are picking, make sure you identify it carefully, from at least two sources and if in doubt, throw it out.

Stay safe in the great outdoors,