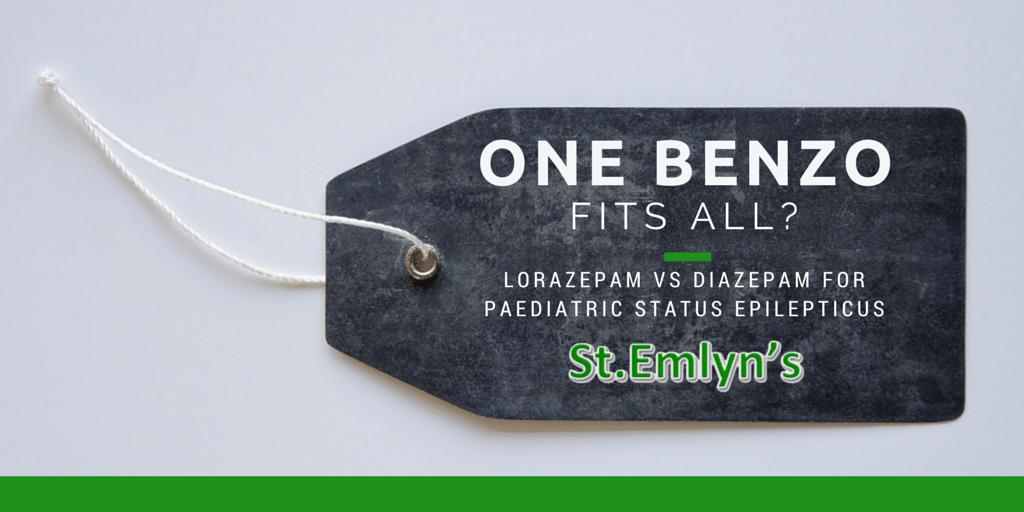 It’s been a little quiet of late here in the lofty towers of St Emlyn’s Virtual Hospital, not because the patients have stopped coming (trust me, they haven’t) but because many of the clinicians have spent their non-working hours squirreled away desperately designing talks for SMACC.

Now that the 1st May submission deadline has passed I’m pleased to report that not only has clinical care continued at Virchester but the commitment to delivering evidence-based Emergency Medicine is alive and well too; the Journal Club lives on!

Last week we looked at this paper from JAMA by the PECARN group (Paediatric Emergency Care Applied Research Network – a research collaborative not unlike PERUKI) which set out to answer the question: which is the better first line benzodiazepine for fitting children, lorazepam or diazepam?

You can read the abstract below: click on the image and it will take you to the the full paper at JAMA which is currently free-to-access. 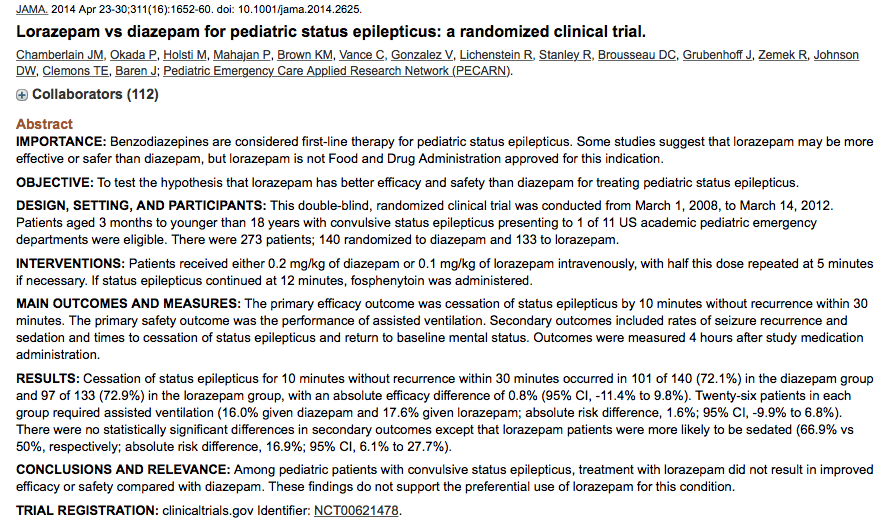 What Kind of Paper is This?

The authors tell us that this is a double-blind, randomised clinical trial comparing efficacy of intravenous lorazepam with intravenous diazepam in children presenting to the ED with generalise convulsive status epilepticus.

Who and What Was Studied?

Children aged 3 months – 18 years presenting with generalised tonic-clonic status epilepticus were recruited at 11 academic Paediatric Emergency Departments in the US across a recruitment period of four years and two weeks. 273 patient were included in primary efficacy analysis, 140 of whom received IV diazepam (0.2mg/kg) and 133 received lorazepam (0.1mg/kg).

The primary outcome was cessation of status epilepticus within ten minutes of the initial dose of study medication with sustained absence of convulsions for 30 minutes. The authors defined end of status epilepticus as the time when the convulsive activity stopped as long as there was a return to normal level of consciousness within four hours.

The study also looked at some safety endpoints, namely severe respiratory depression occurring within four hours and requiring assisted ventilation, and some secondary outcomes such as time to return to baseline conscious level.

Patients were followed up for 24hrs or until hospital discharge (whichever came first) with a telephone call at 30 days to determine the incidence of adverse events after discharge.

Tell Me More About Status Epilepticus In This Paper

There’s an interesting definition of what we mean by status epilepticus which consists of the following descriptors:

1. 3 or more convulsions within the preceding hour and currently experiencing a convulsion OR

2. 2 or more convulsions in succession with no recovery of consciousness and currently experiencing a convulsion OR

3. A current single convulsion of at least 5 minutes’ duration.

The third definition was the one which prompted some discussion in the St Emlyn’s journal club, not because we wouldn’t treat these children with benzodiazepines (the APLS fitting child algorithm advises treatment if a seizure has not stopped within 5 minutes) but the idea that this constitutes status epilepticus. APLS in the UK defines status epilepticus as “continuous and generalised convulsions for more than 30 minutes”. In practice, this difference in definition doesn’t matter all that much if we agree that all three of these groups of children are those in whom we would be reaching for one of these medications with the aim of stopping the seizure, but it does rather broaden the eligibility criteria which potentially has the dual effect of making recruitment easier and altering the baseline proportion of those patients likely to achieve the primary outcome without the intervention.

What Did They Find?

Data was analysed per-protocol, rather than on an intention-to-treat basis (see below).

The study found no significant difference in the primary efficacy outcomes with cessation of status epilepticus (sustained for at least 30 minutes) in 72.1% of the diazepam group and 72.9% of the lorazepam group (absolute efficacy difference 0.8%, 95% confidence interval -11.4% to 9.8%).

The number of patients requiring assisted ventilation was quite high – 26 in each group (16.0% in the diazepam group, 17.6% of the lorazepam group) – but there was no demonstrable difference in proportions (absolute risk difference 1.6%, 95% confidence interval -9.9% to 6.8%). Looking at the secondary outcomes, there was a statistically significant difference in time to return to baseline conscious level in favour of diazepam. There are some interesting diagrams in the supplemental content which you can access here (it will download as a PDF) – have a look particularly at eFigure 3 which shows nicely the difference in proportions fully awake at 4hrs.

The authors conclude that treatment with lorazepam did not result in improved efficacy or safety compared with diazepam and as such their findings do not support preferential use of lorazepam for paediatric status epilepticus.

In this paper, the subjects were analysed only if their treatment matched the protocol laid out originally. As you can see in the CONSORT diagram on page 1655, this meant that quite a lot of patients were excluded from the final analysis and the reasons are given (for example, receiving open label medication or receiving late administration of a second dose of study medication). This is called per protocol analysis and is better for non-inferiority studies where deviation from the study protocol makes it more likely you’ll find no difference between the treatments and the trial will be positive (the treatment in question will be deemed non-inferior).

In contrast, intention-to-treat analysis means that all the subjects are analysed as part of the group to which they were randomised – even if they didn’t receive any treatment at all and dropped out of the study altogether. This sort of analysis is more pragmatic; it gives you a good idea of whether the effects are likely to be replicated in real life as it takes account of the reasons that subjects drop out of therapeutic trials (like horrendous, intolerable side-effects of medications). Intention to treat analysis is good for superiority trials as it has a conservative effect; if you find that the treatment in question really is demonstrably superior despite the dropouts then it is likely it really is superior.

Problems With The Paper And Questions It Generates

Once again we come up against the superiority/non-inferiority/equivalence conundrum. The authors state that the purpose of the study was to test the primary hypothesis that lorazepam is superior in efficacy and safety to diazepam for the treatment of paediatric status epilepticus. So if the study fails to show a difference then that must mean lorazepam is inferior, right?

Well… No. The study is powered to detect whether one treatment (lorazepam) is superior to the other (diazepam). A non-inferiority trial would require more patients and this particular study would be underpowered to detect non-inferiority. Given that it’s a superiority study, the per protocol analysis has implications as above: it would have been better to harness the conservative influence of intention to treat analysis from the outset so that if a difference had been detected we could have been more certain of its legitimacy.

Going back to the original methodology there are some potential issues with the blinding in this study; although opaque syringe cylinders were used, the switched-on Virchester trainees noted that when paediatric medications are administered intravenously in the UK there is usually a small clear plastic extension line with luer lock ports attached to the cannula – we’ve had no guarantee that the difference between diazepam and lorazepam wouldn’t have been determinable by looking at the infusing fluid in the extension line even if you couldn’t tell the difference between the syringes.

We also had some issues with the recording of the primary outcome which was determined by the treating physician. Ideally this would be determined by an independent individual, particularly for non-numerical clinical outcomes. We wondered if the study team had calculated a Kappa Statistic for this and postulated that if they had it probably wouldn’t demonstrate good levels of inter-observer agreement. Combine poorly undertaken blinding with lack of independence in measuring the primary outcome and the study suddenly looks rather shaky.

What Does This Mean for Status Epilepticus in the Paediatric ED?

Our consensus at the real-life St Emlyn’s journal club was that this study wasn’t going to change our practice. APLS protocols advice lorazepam for paediatric status epilepticus and we found no reason to deviate from that – however, should we find lorazepam in short supply then we felt reasonably confident that we would have no issues reaching for intravenous diazepam instead (in either case keeping a bag-valve-mask nearby).

4 thoughts on “JC: One Benzo Fits All? Lorazepam vs Diazepam for Paediatric Status Epilepticus”